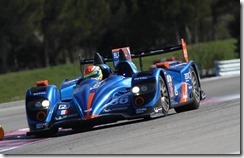 35 years after its historic victory at Le Mans 24 Hours, Alpine is back in the competition for the first leg of the European Le Mans Series at Silverstone. The whole Signatech-Alpine team is ready to take on the challenge and bring the Alpine legend back to life for thousands of fans looking for a great start! Since the announcement of Alpine’s comeback, the world media has underlined the enthusiasm this news has provoked, even the young generation have taken to Twitter with ‘Alpine is back’ and they want everyone to know it!

During the group tests in Castellet for the ELMS, the Signatech-Alpine team, managed by Philippe Sinault, focused on the Alpine chassis development in partnership with Michelin, historical partner in pneumatics. He wasn’t aiming for a score at any price, but Nelson Panciatici still managed the fastest time, which is looking good for Silverstone. The Alpine No 36 is ready to fight its first race in the United Kingdom.

Nelson Panciatici has been preparing with great calm and, even if he still has a lot to learn in a discipline he discovered only last year, he is ready to face the competition which already looks fierce:

“I’m full of confidence for this first meeting of the season because we have shown in the official tests in Castellet that we can compete. I was able to run several series with the different tyre options Michelin gave us and I think we collected some interesting information, we’re on the right track. I know that the competition will be tough but we have prepared well. With Pierre Ragues, my co-driver, we make a consistent and fast team with nothing to fear from the other favourites. I also know Silverstone, it’s one of my favourite circuits. The series of the Copse, Maggots and Becketts is a pleasure to drive and critical for making good time. It also needs a well-balanced car and that’s one of the strong points of our car. We’ve made a lot of progress in the last few weeks, notably with the Michelin tyre management. We are ready for the start of the season. I know Alpine has the ability to shine and even though it’s promising to be difficult, we can try to win this first race. I can’t wait to get to Silverstone!”

Carlos Tavares will also be making the trip to follow the marque’s comeback live. This capital support will be a fantastic boost to the whole Signatech-Alpine team and its drivers, which is just what they need to face the competition!