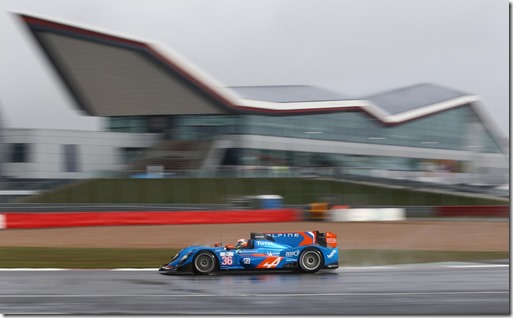 In its comeback to competition after 35 years away, the Alpine A450 managed by the Signatech-Alpine team and with Nelson Panciatici and Pierre Ragues behind the wheel, finished fourth in the first round of the European Le Mans Series. The race was unfortunately interrupted 40 minutes before the end after more than one hour behind the safety car because track conditions were considered too dangerous by the Race Directors. The Alpine A450 will nevertheless have held lead positions in the ranking after a very good start by Nelson Panciatici.

The Alpine A450 displayed its potential from the very first free practice race where Nelson Panciatici made the best time in the first session and the second best in the second. For the qualifiers, Nelson as opposed to his main competitors, immediately took the battle to the track from the start of the session because rain looked imminent and the risk later would be too great. The Alpine driver still managed the third best time under the watch of Carlos Tavares, Renault’s Chief Operating Officer, who came to support the whole Signatech-Alpine team.

The track was dry when all the competitors launched into the race but it started to rain during the formation lap. Nelson Panciatici, who started from third position on Michelin’s slick tyres, was in the lead from the opening corner until the safety car came out for the first time at the end of lap one, cancelling the advantage of his excellent start. Nelson went back into the pits after five laps to change tyres to intermediate and set off again in ninth position before climbing back to join the three leaders and made the second best time of the race while he was at it.

His co-driver, Pierre Ragues, then took the relay on Michelin’s wet tyres. Starting in fifth position, he rapidly gained a place before the safety car came out on the track again.

After an hour of neutralisation, the Race Directors decided to stop the race and fix the positions which cancelled the offset strategy the Signatech-Alpine team had adopted. Frustration was evident:

“It was an important weekend for the whole team, » Philippe Sinault, Signatech-Alpine’s Team Principal, underlined. « It was hard work which got us ready for this first meeting. It’s a shame to have to suffer such a frustrating race… Our drivers get a star for bringing the Alpine A450 back intact but these terrible conditions cut the competition short. We had a good strategy which could have paid off if we’d had the full three hours. The safety car and the red flag stopped us from achieving our objective.”

Nelson Panciatici is torn between disappointment and satisfaction: “We had the means to win from first practice and whether it be in the rain or the sun, it’s a good sign for the rest of the championship. I had a very good start and put the Alpine A450 in the lead. It’s a shame there was the safety car because our pace could have given us a considerable advantage. Under the rain it’s difficult not to make a mistake. I attacked really hard but on intermediate tyres, the end of my relay was particularly difficult. I should have taken the wheel again for the end of the race but it was interrupted too soon, which discounted us from reaching the podium. In any case, the points we’ve made in fourth place will certainly be very important when it comes to tallying all the scores of the championship. »

The Signatech-Alpine team and their drivers will now get ready for the next round of the European Le Mans Series which races on May 17 and 18 on the Imola circuit in Italy where they will definitely want to make the colours of Alpine shine!