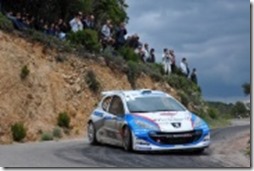 Co-driven by fellow Frenchman Xavier Panseri in a Michelin-shod Peugeot 207 Super 2000, Bouffier started the final day 3.6s behind Kopecký but powered ahead when the ŠKODA Motorsport pilot struggled in the slippery conditions on Saturday’s opening test. Bouffier pulled further clear with a second stage win only for Kopecký to hit back with the fastest time on stage nine and cut Bouffier’s lead to 10.7s heading to service in Ajaccio with two stages remaining.

There, Kopecký opted to fit soft-compound Michelin tyres to his Fabia S2000 for the final brace of stages in the mistaken belief that it would rain. Instead the hard compound rubber on Bouffier’s 207 gave the Delta Rally driver the performance he craved as Kopecký lost time when his car dropped onto three cylinders on the final stage.

“To join the illustrious list of French drivers who have won Monte-Carlo and Corsica makes me very happy,” said Bouffier, now a three-time ERC winner. “But I am also happy to win this event on French territory. Against some very strong opposition this is a significant achievement.”

Kopecký, who has increased his ERC title lead to 37 points over Craig Breen, said: “I had no confidence on the first stage this morning so I reduced my speed. We took some time out of Bryan on stage nine but we took soft tyres for the final stages thinking it would rain. Finally we had some problems with the engine and finished second, which is still not bad for the championship.”

Le Mans 24 Hours racer Stéphane Sarrazin marked his return to rallying for the first time since last September by bringing his MINI John Cooper Works home in a strong third following a close battle with Irishman Craig Breen. The Peugeot Rally Academy runner was third starting day two only to fall back to fourth when he slid into a bridge parapet on stage seven. Although the impact left his car with significant damage, it didn’t make a big difference to his speed and he was back in third at the end of stage nine. But Sarrazin proved too strong and while Breen settled for fourth, his performance earned him the prestigious Colin McRae ERC Flat Out Trophy.

Rallying legend François Delecour, who only secured his drive last week, achieved his aim of a top-six finish in fifth – 20 years after he won the event. His Munaretto Sport Peugeot was back to full working order after a handful of problems slowed the 50-year-old Frenchman on day one.

Jean-Mathieu Leandri recovered from a late puncture to take eighth for Saintéloc Racing and the honour of being the top Corsican driver home after Jean-Marc Manzagol retired on stage nine. Bonnefis claimed ninth and top points for Renault Sport Technologies in the ERC Production Car Cup for Teams. Jean-Michel Raoux completed the top 10 in a Delta Peugeot.

Kornél Lukács was first home in the ERC 2WD Championship after a puncture and an off wrecked long-time leader Pierre-Antoine Guglielmi’s hopes. Molly Taylor secured the ERC Ladies’ Trophy with a strong second in class with Vasily Gryazin third.

Elsewhere, Antonín Tlusťák was the GPD Mit Metal Racing Team’s top finisher in 11th with team-mate Jaroslav Orsák one place behind. The result hands the Czech squad a comfortable lead in the European Rally Championship for Teams. Marco Tempestini was the leading Napoca Rally Academy driver home in 16th but there was late disappointment for Daniel Oliveira, who went off the road on the final stage when running in the top 10.

Formula One racer winner Robert Kubica didn’t restart following the fuel pump failure that put him out on stage five. The Pole said: “It’s a pity that we retired as I felt very good behind the wheel. I was in the lead without having done any mistakes and I am satisfied with this and our tyre choices, which were very complicated with the changing weather conditions. I was here to learn and although the rally was short for me I’ve got more important experience.”

Watch Inside ERC on Eurosport and Eurosport Player as follows:

Go to www.fiaerc.com for the championship positions following round five of 12.