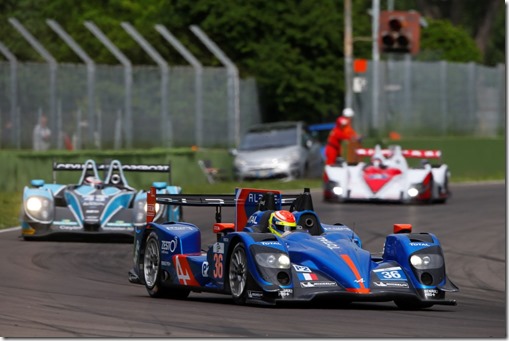 Nelson Panciatici and his co-driver, Pierre Ragues, crossed the finishing line of the 3 Hours of Imola in second place. With this first podium, the Signatech-Alpine team and their drivers are now in second place in the provisional rankings of the European Le Mans Series Championship.

For its roaring return to Imola, the Alpine marque did not pass on the opportunity to shine from first practice, with a best time for Nelson Panciatici. The performance in free practice, with a full tank of fuel, augured well for a good qualifier but a slow puncture relegated the Alpine A450 to the second line which penalised them at the start of the race. While Nelson had to be satisfied with following the pace on a circuit where it is difficult to overtake, the Alpine driver snatched the best time during his relay.

Nelson Panciatici was the first to come back into the pits to hand the wheel to Pierre, his co-driver, who went out into a double relay after a change of tyres. This offset strategy compared to their competition was to serve them well by the end of the race.

He relinquished the wheel to Nelson after a great relay in which he closed in on the race leaders. Unfortunately, a problem at restart cost them some thirty seconds. Nelson Panciatici went straight into battle to quickly reach second place. He then tried to put pressure on the leaders by taking back more than 30 seconds before relaxing his pace in the last two laps. Nelson crossed the finishing line some 40 seconds behind the winners to give Alpine its first podium since victory in the Le Mans 24 Hours of 1978.

“We were fast during the whole race,” Nelson pointed out.  “Despite the traffic we managed to stay in front positions. I had good pace right to the end thanks to our excellent Michelin tyres. We were disappointed after the qualifiers and rightly so because I had to settle with following the pace at the start of the race when I was actually faster. It’s also harder in traffic when you’re behind others. Our offset strategy was good but we’re still learning what our Michelin tyres can do and we didn’t try any double relays. It’s a good result for the whole team even though I think we had the potential to win. It’s good news for Le Mans!”

“Our two drivers did a very good job,” said Philippe Sinault, the boss of the Signatech-Alpine team: “We still lack some perspective to accurately gauge our Michelin tyres’ capabilities during a race. We didn’t risk a double in the first relay although the tyres did have the capacity. We’ve got what it takes. Thanks to the data we’ve gathered, we will be able to optimise our strategies. The project has generated huge amounts of enthusiasm. This podium is a positive boost before the 24 Hours of Le Mans.”