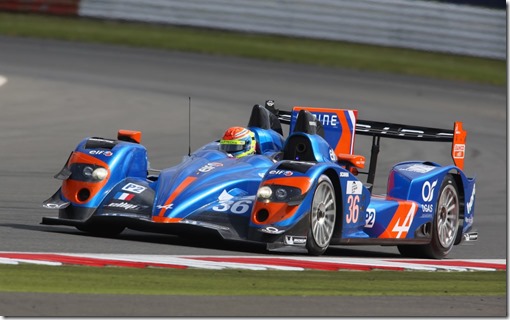 By finishing fifth in the 4 Hours of Silverstone, Nelson Panciatici and the Signatech-Alpine team score their first points. If their objective is still victory, Nelson Panciatici knows these hard fought ten points will be important in the final score and that they will have to score at every stage of the European Le Mans Series to hope to win the title for a second consecutive time!

They spent free practice on Friday looking for the best technical solutions to adapt the Alpine A450 and their new Michelin tyres to the particularities of the Silverstone circuit, the Signatech-Alpine team came to a good compromise. This is what allowed Nelson Panciatici to qualify in seventh place, while closing the time gap considerably on the best.

Nelson had an excellent start and held fifth position, but premature wear on his rear left tyre stopped him from climbing higher. He then passed the wheel to his co-drivers, Paul Loup Chatin and Oliver Webb. They pulled off their gamble at the end of the race, not going into the pits because they’d saved enough fuel while the security car was out due to a collision between two LMP2s, and the Alpine A450 crossed the finishing line in fifth place.

This fifth is encouraging but Philippe Sinault, the manager of the Signatech-Alpine team, will not rest yet: “We knew that we had to work really hard to get the Alpine A450 to function with the new regulation Michelin tyres. The drivers and the team did a fantastic job. Thanks to them, we scored some important points. Alpine and Michelin are focused on further improvements to the car in order to hold lead positions in Imola! We could see that the races are going to be even more fierce than last year! The points we took this weekend could turn out to be critical!”

The objectives for Nelson remain the same: “The team has, once again, worked really hard to give us the best possible car. We tried to make up some lost time and we improved throughout the weekend. Even if the result does not show it, I think I had a good qualifier by getting the best out of my Alpine A450. We were a bit short on time to continue our work. We managed to close the gap on the fastest guys. I’m still confident for the coming races and I sincerely think we can aim for a podium in Imola. The points we scored here could prove to be important in our battle for the title, victory is still our objective!”

The Signatech-Alpine team and their drivers will now prepare for the next challenge of the European Le Mans Series which will take place on the Imola circuit on May 17 and 18 where they will definitely want to make the colours of Alpine shine once more!