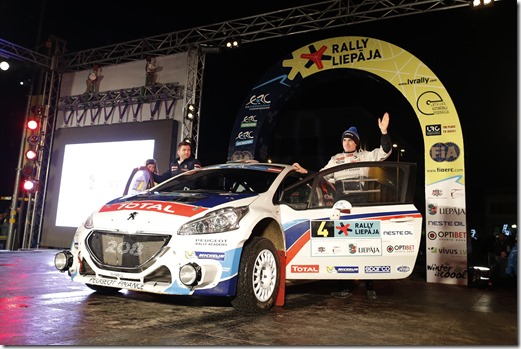 Craig Breen has won the second round of the 2015 FIA European Rally Championship, Rally Liepāja in Latvia, after a faultless drive in his Peugeot Rally Academy 208 T16.

Co-driven by Great Britain’s Scott Martin, the 25-year old Irishman mastered the most difficult of winter conditions, with thawing ice and slippery wet snow on day one and heavy blizzards of snow and freezing fog on day two. Breen’s last ERC win was on last March’s Acropolis Rally in Greece, when he went on to give the 208 T16 a famous victory on its ERC debut.

“It was really a rally of attrition in tough conditions, but when we were pushing we were only beaten on one stage by 0.7s so we always had the speed,” said Breen, who triumphed by 1m 40.7s. “Things changed very quickly but we stuck to our pace and this is an awesome result. You have to go back through the history books, to the 1960s, for the last time an Irishman won on snow. It’s a big boost for me and after winning on gravel and Tarmac in Greece last year I’ve now won on snow so that makes me a bit of an all-rounder. Hopefully this will be the first of many this year and the championship challenge is very much back on. Who can forget the next rally of the year is the Circuit of Ireland and we’ll be coming back there with a win under our belts just like last year."

Out of the top category four-wheel drive cars that did complete all the stages, Robert Consani (Peugeot 207 S2000) grew in confidence as the event progressed and was delighted to reach the finish in fifth to main his ERC title challenge. Rear axle problems on the final day couldn’t stop Raul Jeets completing the top 10 in his MM-Motorsport Ford Fiesta R5, while Jarosław Koltun enjoyed a solid run in his Fiesta R5.

Martin Hudec’s first international rally in a ŠKODA Fabia S2000 was rewarded with 19th, although spectators did have to rescue him after he went off the road on SS8. Antonín Tlusťák lost a lot of time driving in heavy snow on the same stage, and finished 21st in his Fabia S2000.

For the drivers who returned under the Rally 2 rules, Alexey Lukyanuk showed what could have been had he not rolled his Chervonenko Racing Fiesta R5 on day one, by setting fastest time on five of day two’s six stages.

After damaging a wheel on day one, Jaroslav Orsák returned the following day, but retired his Fabia S2000 on the road section to the third stage with engine failure – while Giacomo Costenaro (Peugeot 207 S2000) to gain snow driving experience.

Twenty-two-year old Estonian Siim Plangi led from start to finish, and set fastest class time on all but one stage, to win ERC2 by 3m47.7s in his Mitsubishi Lancer Evolution X. There was a tremendously close battle for second, with Jānis Vorobjovs (Mitsubishi) and Dominykas Butvilas (Subaru Poland Rally Team Impreza WRX STI) tied for position after SS9. However, Vorobjovs lost 90s on the final stage when he hit a snow-covered ditch and picked up a puncture. He dropped to fourth, leaving Butvilas in second and Latvian Mārtinš Svilis – who had received a 30s penalty for leaving service late at the end of day one – third in his Mitsubishi. Dávid Botka was delighted to finish fifth in his Lancer, while turbo problems delayed Krisztián Hideg, who came home sixth in his Evolution IX. Łukasz Kabaciński survived a high-speed off on the last stage to secure seventh, while Tarmac ace Vojtěch Štajf was eighth in a similar Subaru. Inessa Tushkanova had several moments in her Mitsubishi, but survived to take the ERC Ladies’ Trophy. Tomasz Kasperczyk restarted, but stopped again, this time with engine problems in his Subaru.

Hungarian teenager Kristóf Klausz was the best of the non-ERC Junior contenders eligible for ERC3 points on the final stage in his Renault Clio R3, after Aron Domžala lost a lead of 3m50s with by going off within sight of the finish. The Citroën DS3 R3T was understandably distraught by the time he’d reached the flying finish, having lost over five minutes getting his car back on the road. Latvian World Rallycross Championship star Reinis Nitišs (Sports Racing Technologies Fiesta R2) completed his first rally in a very impressive 25th overall – and just 3.1s behind Domžala. Round one winner Sławomir Ogryzek (Peugeot 208) rounded off the finishers after several delays early on.

Emil Bergkvist doubled his overnight lead to win the opening round of the ERC Junior Championship by 30.1s in his ADAC Opel Rallye Junior Team Adam R2. The 20-year old Swede also finished an extraordinary sixth overall. Steve Røkland had a great run to second in his Peugeot, while Ralfs Sirmacis completed the ERC Junior podium for Sports Racing Technologies – despite running fourth on the road on day one and finishing SS8 with two chicane marker tyres stuck underneath his 208’s sump guard. The Latvian also earned the prestigious Colin McRae ERC Flat Out Trophy following his battling performance. Mattias Adielsson rolled his 208 after the flying finish of SS8 while battling for the lead, yet with considerable body damage and engine problems finished fourth. On his first snow rally, Jon Armstrong finished a strong fifth in his 208, one place ahead of Chris Ingram, who lost time when a gear selection problem resulted in his Peugeot UK entry momentarily stick in third gear and skid into a ditch on SS7. After crashing into a tree on day one, Diogo Gago gained a huge amount of experience by finishing all the stages in his bruised 208. Aleks Zawada had just set fastest time on SS6, when he slid his Opel Adam R2 at high speed into a ditch on SS7, punching a hole in its radiator. Wojciech Chuchala lost 20s in a ditch on SS7, and went off for good on the next stage, while Łukasz Pieniążek crashed his similar 208 on the final stage. Rainer Rohtmets lost almost 20 minutes in a ditch on SS8, and withdrew on the road section after SS9 when his Citroën C2R2 picked up an engine problem. Quotes from all drivers are attached.

Go to Fiaerc.com for the championship positions following round two of 10.

Round 03/10: Circuit of Ireland Rally (Northern Ireland), 2-4 April 2015: First held in 1931, the Circuit of Ireland Rally is not only one of the oldest rallies in the world, it’s also one of the most prestigious and has the honour of hosting the ERC’s first pure asphalt round of the 2015 season. Based in Belfast, the rally runs on challenging country lanes in Northern Ireland while some fan-friendly street stages in town centre locations are also set to form part of the itinerary with organisers promising a “bigger and better event” than in 2014. The rally will also welcome competitors from the Irish Tarmac and Northern Ireland Stage championships. More information: Circuitofireland.net.