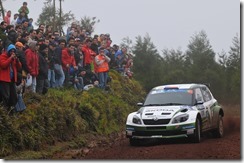 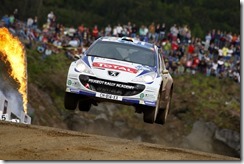 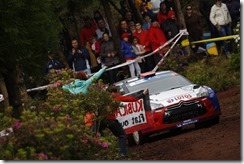 There was high drama on round four of the FIA European Rally Championship in Açores today as overnight pacesetter Robert Kubica hit trouble on the mid-Atlantic archipelago, handing top spot to ERC title-leader Jan Kopecký in the process.

Kubica, in a Citroën DS3 RRC, was five seconds clear of his ŠKODA Motorsport rival when he encountered thick fog on the Sete Cidades stage, which was being shown live on Eurosport and RTP Açores. With visibility limited to 10 metres in places, Kubica lost considerable time as he wisely backed off. The Formula One race winner was battling back into contention from sixth when he rolled on Feteiras with the dramatic aftermath streamed live on the official ERC website.

Despite inflicting substantial damage to his car, Kubica was able to drive back to service in Ponta Delgada, his task eased when the repeat of Sete Cidades was cancelled due to heavy fog. He explained: “We went to a right-hander and I lost the car. The road was very narrow so we clipped a bank. We nearly managed to get it back but the bank was bigger and thicker and unfortunately it pulled us on the side and we rolled. At the end of the stage we managed to fix a bit the wheel and we managed to come back. It has been difficult, difficult day.”

The Polish hero, who has slipped to eighth place, continued: “The crash was not an issue of visibility. I was surprised how the car reacted. I was not expecting it. I was not pushing because we had bad luck with the fog at the end of the last stage of the first loop. Even driving at normal speed there was very poor grip in the corner and we lost the car. It was a result of a mistake.”

Kopecký, whose overall lead starting Saturday’s final leg is 13.1s, experienced problems of his own, albeit of a somewhat private nature. “I was not so concentrated because my crotch strap was not quite in the right position and it was not very comfortable over every jump,” said the Czech champion. “The conditions were very difficult today, it’s good to be leading but Saturday is the longest of the rally and there are some very tricky stages.”

Behind Kopecký, Craig Breen is firmly in contention for first place despite suffering a puncture three kilometres into stage seven. The Peugeot Rally Academy driver has vowed to go on “full attack” on leg two as he bids to make it victory number one in this year’s ERC.

Meanwhile, Bruno Magalhães restarted on Friday morning in seventh place but climbed to third on the back of a charging display in his Peugeot 207 S2000. However, with multiple Azorean champion Ricardo Moura 1.6s behind and Bernardo Sousa a further 0.6s in arrears, the battle for Portuguese bragging rights is far from settled.

While Jérémi Ancian and Jean-Michel Raoux made it through Saturday’s stages in sixth and seventh respectively, Jan Černý was not so lucky. A fuel injector issue slowed the ERC 2WD champion in the morning before he wrecked his Fabia S2000’s front-left corner striking a rock on stage eight. Mark Wallenwein suffered a spectacular roll on stage nine but managed to continue after spectators helped to put his Fabia on its wheels.

Miguel Barbosa leads the ERC Production Car Cup after GPD Mit Metal Racing Team’s Jarosláv Orsak crashed out on stage eight. Hannes Danzinger tops the ERC 2WD division after Stéphane Lefebvre dropped back when he had to stop to repair a belt failure on his Peugeot 208 R2 on stage 10. Molly Taylor’s bid for success in the ERC Ladies’ Trophy ended when she got stuck in mud avoiding Jean-Mathieu Leandri’s stricken car one kilometre into Sete Cidades, handing the lead to Ekaterina Stratieva. Alessandro Bruschetta is the Napoca Rally Academy’s leading runner in 11th.

Leg two is the longest of the rally at 111.15 kilometres. Graminhais, the first of seven stages, gets underway at 09:21hrs local time. Two stages will be shown live as follows:

* All timings are CET and subject to change