*Bruschetta and Bessenyey win support classes for Subaru and Honda 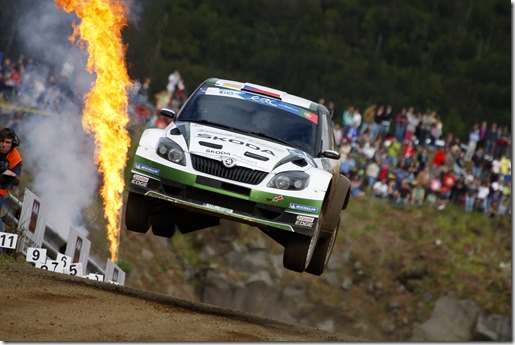 Jan Kopecký continued his impressive start to the FIA European Rally Championship season by making it three wins out of four with his first gravel victory on SATA Rallye Açores today.

Driving a Michelin-shod ŠKODA Motorsport Fabia Super 2000 alongside navigator Pavel Dresler, Kopecký made sure of his latest success by completing the event-closing Tronqueira stage, one of six produced for live broadcast by Eurosport Events, with his seventh-fastest stage time.

The result means that Kopecký increases his lead of the ERC standings to 27 points heading to round five in Corsica next month and lays to rest the painful memories of 2010 when he crashed out of top spot five kilometres from the finish of the same Tronqueira stage.

Craig Breen extended his run of podiums to three events with a fine second place in a Peugeot Rally Academy 207 S2000 as local hero Ricardo Moura bagged the final podium place on his debut in a Fabia S2000 after a close scrap with fellow Portuguese Bruno Magalhães and Bernardo Sousa. Moura’s performance earned him the coveted Colin McRae ERC Flat Out Trophy.

In the ERC Production Car Cup there was a debut triumph for Alessandro Bruschetta in a Napoca Rally Academy Subaru Impreza R4 STI. Hannes Danzinger was on course for victory in the ERC 2WD Championship but an off three stages from home left his Renault Clio R3 with damaged suspension. Diogo Gago inherited the class lead only to stop two kilometres from the finish of Tronqueira, which left Zoltán Bessenyey to take the spoils for Eurosol-Honda Civic Type R.

“I’m very happy because my last gravel rally was two years ago and this is my first win on gravel so thanks to ŠKODA and to everyone in the team for doing a great job,” said Kopecký. “I was not thinking about the corner where I crashed but when I passed that corner I said ‘okay, it’s over’ and then we went wide on the next corner so I thought it was better not to think about these things again. It’s been a good start to the season and now we need to prepare for Corsica.”

Kopecký began Saturday’s final seven stages in the best possible fashion by going fastest on the first test, Graminhais, to extend his overnight advantage of 13.1s by 2.6s. Although Breen narrowed that margin slightly on Tronqueira 1, Kopecký was quickly in control by winning stage 15 and sharing the fastest time with his close friend Kubica through the Grupo Marques superspecial. While maintaining that he no longer needed to push at the midday service in Ponta Delgada, Kopecký won the event’s closing three stages for a winning margin of 32.2s.

Formula One race winner Robert Kubica had led after seven stages but dropped out of contention in thick fog on stage eight on Friday. His efforts to make up lost ground suffered a major setback when he rolled on stage 11, which inflicted substantial damage to his Citroën DS3 RRC in the process. Following repairs, the Pole increased his tally of event stage wins to seven as he secured sixth overall behind fourth-placed Magalhães, who slipped back with set-up issues, and fellow Peugeot driver Jérémi Ancian. Like team-mate Breen, Frenchman Ancian impressed on his first visit to the spectacular Açores archipelago.

There was early disappointed for Bernardo Sousa and Jean-Michel Raoux, who both went off the road on the fog-hit first stage of the day. Jan Černý made it through that test only to retire a handful of corners into Tronqueira when he hit an earth bank. Mark Wallenwein’s Fabia required extensive repair before the action began on Saturday following his roll on Friday. The German champion was heartened when members of two other teams helped to fix the damage. He finished 13th.

Behind Alessandro Bruschetta and Luis Rego, who was slowed in the closing stages by a turbo fault, Antonín Tlusťák top scored for the GPD Mit Metal Racing Team in the FIA European Rally Championship for Teams with his first top 10 of 2013. Marco Tempestini landed his first outright drivers’ points in 10th for the Napoca Rally Academy, which now heads the ERC Production Car Cup for Teams’ classification outright having been tied with Team Renault Sport Technologies. Tempestini had trailed Janós Puskádi starting the final stage but outgunned the Hungarian by 5.2s.

Ekaterina Stratieva was on course for her second victory in the ERC Ladies’ Trophy when she retired with one stage remaining. Molly Taylor stopped avoiding a stranded car on stage eight.

Watch Inside ERC on Eurosport and Eurosport Player:

All timings are CET and subject to change. Check local listings for further details.

Go to www.fiaerc.com for the championship positions following round four of 13.