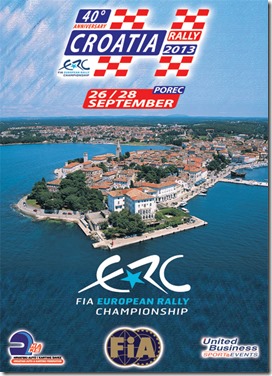 Saturday, 15th June 2013 at 12.00, at the Hotel „PARENTIUM“ in Zelena Laguna (Green Lagoon), the Croatian Car & Karting Federation (CCKF), national sporting authority for car and karting events in Croatia, will present the 40th CROATIA RALLY that will be held from 26-28 September 2013.

The event is registered in the calendar of the Federation Internationale de l’Automobile (FIA) and calendar of Croatian Car & Karting Federation (CCKF) and will be scored for:

· FIA European Rally Championship for vehicles with front-wheel drive for

· Open Championship of the Republic of Slovenia in rally sport

The event will be held under the high patronage of the President of Croatia Mr Ivo Josipović and Croatian Olympic Committee.

Start and finish of the competition are in Poreč and special stages will take place largely in Istria and minor part in Primorje-Gorski kotar County.

In order to organize the event on the highest level special emphasis is placed on the safety of all participants – spectators, citizens along the tracks of special stages, crews and marshals.

At the presentation-press conference will be present the key people and authorities of Istria County, Poreč and CCKF organization committee and United Business management board.