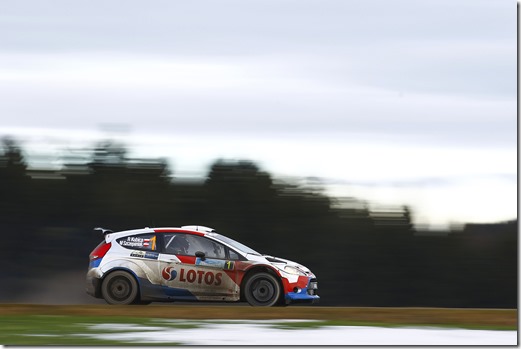 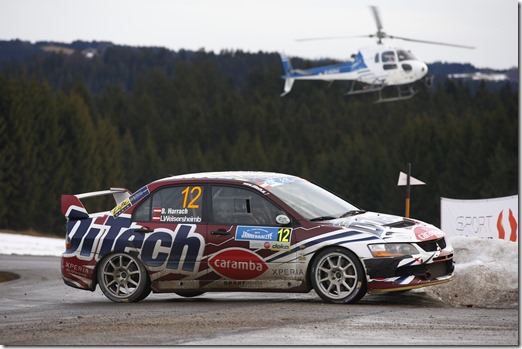 Robert Kubica has secured the biggest win of his rally career as the FIA European Rally Championship season-opener once again came down to a thrilling final-stage decider in the stunning countryside of Upper Austria.

Kubica, a race winner in Formula One, started the closing 25.00-kilometre stage trailing Václav Pech by 11.8s but a stunning performance, coupled with an inspired tyre choice, enabled him to power to victory on the 31 Int. Jännerrallye, Oberösterreich. 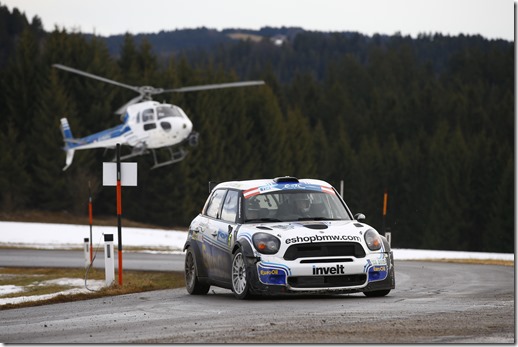 While Pech – who selected slick tyres for his MINI John Cooper Works S2000 – struggled for grip on the mud and rain-hit final test, Kubica opted for a combination of studded and winter Michelin tyres fitted in a diagonal formation, which proved ideal for the demanding conditions.

Co-driven in his Ford Fiesta RRC by Maciej Szczepaniak for the first time, Kubica was fastest in the fog and dark by 23.0s to secure top spot over Pech by 19.9s and top the inaugural ERC Ice Master standings after he set eight fastest stage times.

The Polish driver’s efforts emulated Jan Kopecký’s victory of 2013 when the Czech reversed a deficit of 10.6s to claim first place. And Kubica’s winning margin could have been even higher but for a puncture on day one and a 10-second penalty for a jumped start on Sunday morning. He earned the Colin McRae ERC Flat Out Trophy for his achievements, which was presented by two-time world rally champion Marcus Grönholm, who was in Austria working as an expert TV commentator for Eurosport.

“For sure it’s very nice to do be here as a winner but our priority was to get as much experience and information from this rally in order to prepare for Monte-Carlo,” said Kubica. “I did participate on four ERC events last year but I was often unlucky and made few mistakes as I was using the rallies for training. I was a bit more lucky this time but the conditions were very difficult and for sure this was one of the toughest weekends of my motorsport career.”

Czech champion Pech, who took the lead on Sunday morning when Kubica lost a few vital seconds with a minor brake issue, said: “The final stage was very hard with a lot of dirt. We went fast but we tried not to destroy the car. I’m disappointed not to have won but I tried my best and this was a good fight.”

Eleven-time Austrian champion Raimund Baumschlager completed the podium after overcoming a handful of set-up issues and a jump-start penalty of his own on day one. With a record-breaking 12th national title his target for 2014, Baumschlager’s season has got off to the perfect start after he secured top Austrian championship points.

Behind fourth-placed ERC Production Car Cup winner Beppo Harrach, Jaromír Tarabus began his ERC bid with a strong fifth overall. Andreas Aigner, the 2013 ERC Production Car Cup champion, impressed on his step up to the ERC’s headlining class by taking sixth in his Peugeot 207 S2000, which he was using in competition for the first time. Vasily Gryazin took a solid seventh ahead of his home round of the ERC in Latvia later this month. Roman Odložilík brought his Fiesta R5 home in eighth with Robert Consani overcoming a spin on the final stage to take ninth on his debut in a 207 S2000. Hermann Neubauer completed the top 10. Kajetan Kajetanowicz, who led before a jammed throttle pedal forced his exit on stage six, did not restart on leg two but is already preparing to face the serious competition ahead on his next appearance in the ERC.

While Beppo Harrach secured a comfortable victory in his Mitsubishi Lancer Evolution IX R4, Hermann Neubauer was hit by brake and gearbox issues at the wheel of his Subaru Impreza R4 STI. Ernst Haneder, whose bakery is located adjacent to the Jännerrallye service park in Freistadt, finished third. Kornél Lukács and Martin Hudec began their season-long campaigns in fifth and sixth respectively.

Martina Daňelhová made her journey from neighbouring Czech Republic more than worthwhile by claiming the ERC Ladies’ Trophy laurels for the first time having battled back from a trip into a snow bank in the closing stages. Ekaterina Stratieva finished second.

Go to www.fiaerc.com for the championship positions following round one of 12.