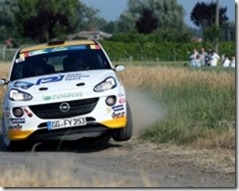 The ADAC Opel Rallye Junior Team will continue its exciting participation in the FIA ERC Junior Championship in 2015 with Marijan Griebel chasing success in an Opel ADAM R2.

Griebel, 25, took part on three ERC Junior events in 2014, scoring several stage wins plus a momentous podium finish on Barum Czech Rally Zlín in late August. While his precise schedule for next season has yet to be finalised, ERC Junior will be his main focus in 2015.

Juho Hänninen, who won the FIA European Rally Championship in 2012, has praised Esapekka Lappi after his fellow Finn captured the 2014 ERC title.

“It was good what he did,” said Hänninen, who contested several WRC events in 2014 with the Hyundai Shell World Rally Team. “ŠKODA again showed how good its team is, Esapekka is in a good school there and it was his turn to win the championship after I won in 2012 and Jan [Kopecký] won the title for ŠKODA last year.”

While Lappi’s plans for next season are unclear, Hänninen believes the 23-year-old has a bright future ahead of him. “He’s still young and still needs experience, but there’s no reason why he cannot go to the WRC one day,” said Hänninen.

Cronin was on course for victory in the ERC Production Car Cup category when he slid off the road in the closing stages of Giru di Corsica-Tour de Corse. “The team at JRM have been fantastic and I really enjoyed the Subaru,” said Cronin. “It was working perfectly and I felt very comfortable in it from the first stage. It’s a serious Group N car and I’d jump at the chance to drive it again.”

Of his early exit in Corsica, Cronin added:“The grip levels on that stage were changing all the time. There were some damp patches in places and I think we just got caught out on the turn in for the corner. Once we touched the gravel on the outside, there was little we could do.”

János Puskádi says he was happy to be back in the FIA European Rally Championship, despite damage to a tyre costing him vital time on Giru di Corsica-Tour de Corse earlier this month.

The Hungarian was tackling a round of the ERC for the first time since Rallye Sanremo in October 2013 and was in 14th position when his Eurosol Racing Team Hungary ŠKODA Fabia Super 2000 suffered a puncture on stage six.

“I was really so happy about all the day, all the race and all the stages but then we had a puncture, which was really bad luck,” said Puskádi, a regular on FIA ERC Trophy events in 2014. “We lost a lot of time but all we can do is keep going.”

The French ace reveals his delight after winning the inaugural FIA ERC Junior Championship for Peugeot Rally Academy to go with his Junior WRC success.

Where does this achievement rank in terms of your other career highlights?
“To win the ERC Junior title is a great moment for my career and winning two titles in France is fantastic. This rally was not easy for me but I am very happy to have finished second. It was not my objective to push but to finish and it’s a very good season for us.”

What’s next for Stéphane Lefebvre?
“For the next year I hope to drive with the R5 car on WRC events and on ERC events as well.”