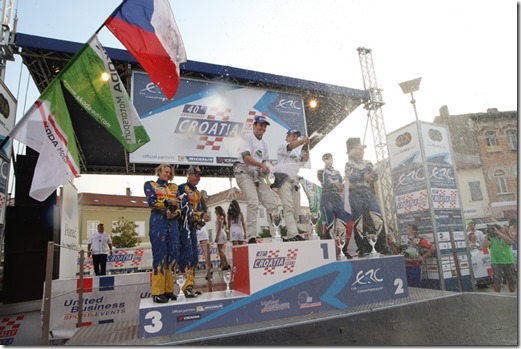 The final podium is completed by Andreas Aigner (Subaru, new leader of the Production Cup) and Hermann Gassner jr. (Mitsubishi) who finished in this order after a great battle – Molly Taylor (Citroen) seals the Ladies‘ Trophy – Zoltan Bessenyey (Honda) only a step away from the 2WD Cup title – Daniel Saskin first of the local drivers – The FIA President Jean Todt attends the event – The Colin McRae Flat Out Trophy awarded to Andreas Aigner for this event.

Jan Kopecky and Pavel Dresler, the new 2013 European Rally Champions with their Skoda Fabia S2000, have won the 40th  Croatia Rally after taking the lead in the final stages of the first leg. They were followed home respectively by Andreas Aigner-Barbara Watzl (Subaru Impreza R4) and Hermann Gassner jr-Ursula Mayrhofer (Mitsubishi Lancer R4) who in the second leg staged a close fight for the runner-up spot and the victory in the Production car class.

The Austrian Subaru driver, who had jumped in the lead under Friday’s rain after passing local driver Juraj Sebalj (winner of Thursday night’s superspecial stage and forced to retire today when he was fifth overall and first of the locals), first resisted the assault of the German who had closed within less than a second, then conquered a small but decisive advantage. Fourth place for the Belgian crew of Peter Tsjoen-Bernd Casier (Skoda Fabia S2000), who took turns in driving. Tsjoen also set the fastest time in the closing stage. The stage wins score is of 8 for Kopecky, 2 each for Tsjoen and Aigner, 1 for Sebalj and one notional time awarded to 4 drivers (Kopecky, Tsjoen, Aigner and Gassner). Fifth place for the South African crew of Henk Lategan-Barry White (Skoda Fabia S2000).

Molly Taylor, together with Sebastian Marshall on the Citroen DS3 R3T in the United Business livery, secured an advanced win in the ERC Ladies‘ Trophy with her second place in class after having risked retirement twice: first when she passed out at a stage end due to fuel vapours in the cockpit and then for a small crash. Victory in the 2WD for this rally went to slowenian Aleks Humar-Florjan Rus (Renault Clio R3), seventh overall, who led Hungary’s Zoltan Bessenyey-Yulianna Nyirfas (Honda Civic R3) who thanks to this result get closer to success in the European 2WD Cup where they have a comfortable lead.

Daniel Saskin-Damir Brunen (Ford Fiesta Rrc) in eighth place are the best local crew in a rally which boasts the season record of foreign drivers (from 3 continents). Today the Rally welcomed a special guest, FIA President Jean Todt, who accompanied by Zrinko Gregurek, general secretary of the CCKF and member of the FIA World Motorsport Council, congratulated himself with the event organisation staff and its promoter Pierfelice Liberali. Jean Pierre Nicholas presented Andreas Aigner with the Colin McRae Flat Out Trophy for this event.

EUROPEAN CHAMPIONSHIP UNOFFICIAL STANDINGS (after round 10 of 12)