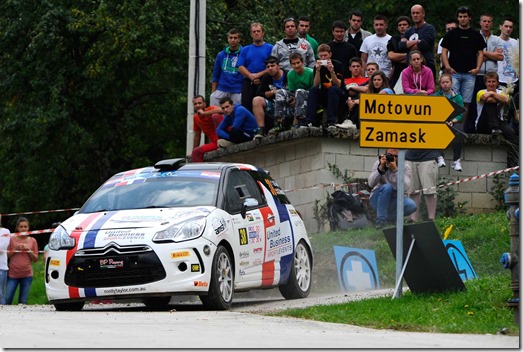 For the strong Australian lady driver, the right conclusion of a season which saw her win the Ladies’ Trophy within the FIA European Rally Championship.

United Business, the company which takes care of her sports management, has decided to enter her in Wales Rally GB, final round of the World Rally Championship, which will take place in Deeside from 14th to 17th of November.

Like last year, Molly codriven by Seb Marshall will race with the Citroen DS3 R3T with the unmistakable United Business livery.

Molly Taylor said: “I am delighted to be back rallying on the Wales Rally GB, where last year we did very well winning two prestigious awards. For Seb and I it will be a great way to end the season rich in satisfactions and we hope to put in practice what we have learned this year”.

Pier Liberali, Team Principal of United Business, said: “After a season which was in many ways hard and difficult and which however saw Molly and Seb win with great determination the Ladies’ Trophy, we as a company deemed right, both for the experience and as a reward, to set up their participation in the last round of the World Championship. Our society, one minute after the end of Croatia Rally where Molly won the title, began to think about the 2014 season. We are looking into various opportunities both for the car and the championship. We await the publishing of the International calendars to decide together with Molly which will be the best solution for next year. Molly Taylor is quite probably the most famous lady driver in the world currently and one of the main representatives of Australia worldwide. We hope that some Australian companies will be our partners in the next season”.

To prepare the event at best United Business has scheduled a test session for its crew, to take place on Monday November 11th, to find the best feeling with the challenging welsh roads.