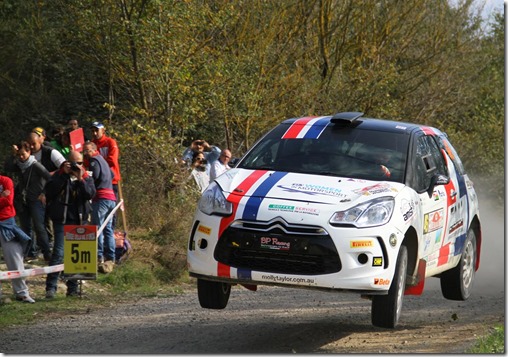 It was a successful weekend for Molly Taylor with Citroen Ds3 R3 at the Ronde della Val d’Orcia, an Italian gravel rally in the heart of Tuscany.

The event featured one 11-km stage repeated 4 times, and attracted a field of 114 cars including WRC, S2000 and S1600 in action on the former WRC Sanremo rally stage.

With Molly’s usual co-driver Seb Marshall absent, Italian co-driver Giacomo Ciucci stepped in alongside the strong Australian lady driver and had his first experience with pacenotes in English.

Molly said “The first part of the stage was foggy and conditions were tricky so we were pleasantly surprised to set the fastest time straight up. Giacomo did a fantastic job adapting to the conditions and calling English notes for the very first time. For the second loop we didn’t anticipate the temperature rising as quickly as it did and we chose the wrong tyres, which were completely destroyed by the end of the stage. At that point we were disappointed to drop some time, but we really enjoyed the battle to get back up in the last two stages. It was a terrific weekend, and a good preparation for Rally GB; the car feels great. The guys at the team did a fantastic job as always and I owe this rally to them for making this possible. I would also like to thank Giacomo Ciucci who did a top job. It was such an enjoyable weekend, the Italian rally community are so friendly and welcoming, it was nice to be a part of it all”.

The United Business driver finished the Rally first in the R3T class, second in 2WD and 12th overall. After this remarkable performance, Molly Taylor will now tackle Wales Rally GB in fashion attempting to end her season on a high, after winning the first ERC Ladies’ Trophy in the 2013 FIA European Rally Championship, in an event where she did very well in 2012.