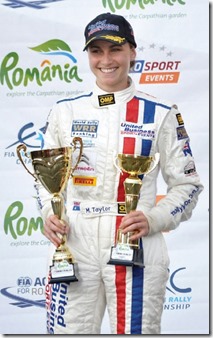 The Molly Taylor’s 2013 season  probably will end with the Wales Rally GB,  a rally where the Australian driver  raced very well in 2012. After winning the “FIA ERC Ladies‘ Trophy” Molly is ready for the  final round of the Citroen Top Driver and of the WRC3. “Wales Rally GB definitely was one of our best events last year – said Molly Taylor –  I love the rally, I think this year it will be quite competitive, because of the points in the Citroen top driver the guys in that series will be going as hard as they can. There are also many local drivers from the British championship taking part in the event, it’s probably going to be the most competitive event we’ve ever done in terms of fast people on board Citroen DS3 cars, it’ll be really exciting for us. We’ll go out there being in a different position from the one we’ve had all of this year, when we had to work towards the ERC ladies‘ trophy; here it’s just one event, so it’s nice to have that kind of freedom for once, one chance to go out and be competitive and see where we rank”. The Wales Rally GB 2013 will have the start ceremony on Thursday 14 November in the town of Conwy on the North Wales coast. The itinerary includes 24 Special stages, more than half of which are either totally new or haven’t been featured in the World Championship since the Nineties and the rally will end on Sunday 17 of November with the Podium in the town of Llandudno.