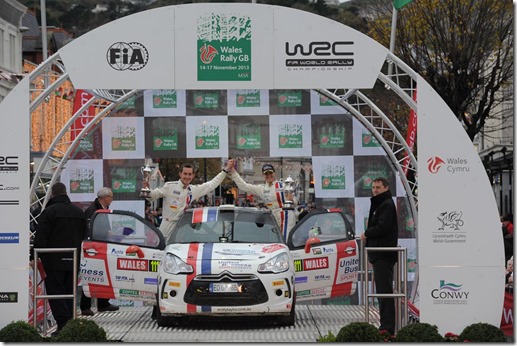 The most famous lady rally driver in activity in the world, Australian Molly Taylor, confirmed her liking for gravel rallies and, after winning the Ladies‘ Trophy in the 2013 FIA European Rally Championship, performed a high quality race at the 2013 WRC Wales Rally GB, against the world’s  strongest drivers participating in the Citroën Top Driver Trophy, throughout the rally the United Business driver fought on equal terms, and in several stages was actually faster than her male colleagues. A solid race, despite an accident which could have cost the Australian dearly, fortunately ended only with damage to the car, which returned to the service area a little "bruised", this forced the talented team boys to extra work to allow the Citroën DS3 R3 to continue. In WRC Wales Rally GB Molly started started with number 111, the triple 1 brought good luck as she finished 23rd  overall after having been, before the accident, as high as 19th .

"Proving to be competitive against the Citroën Top Driver Trophy crews was one of the goals of this race, the other was to be able to be in front of drivers with bigger cars than ours, I think I have achieved both of these goals even beyond the most optimistic expectations given the quality level of the entry list – said Molly – The Citroën DS3 R3 is a fantastic car, I have been rallying with it for two years and would recommend it to anyone; moreover the team has always been excellent, even when I brought a damaged car back into service, they always repaired it without a hitch, and I never had any penalty for late check-out, they are great boys. I think, barring any last-minute surprises, that this has been my last race this season, United Business which takes care of my sporting career is considering what the best solution for next year can be. Pier Liberali does not tell me much about the 2014 programmes, because my job is to drive wherever and with whichever car they will tell me, I trust him and United Business; in two years working together I have done many events, gained a lot of experience, had lots of satisfaction and this year also the prestigious FIA ERC Ladies‘ Trophy. United Business has allowed me to rally at a high level taking care of every detail, I am very happy with them and with myself, together we have achieved important results. I am sure that in 2014 too my professional growth process will continue the positive trend which began two years ago, for now I enjoy the result obtained in Wales".

No indiscretion has currently leaked on the programmes for 2014 , but United Business has confirmed in an informal way the existence of some negotiations so that Molly Taylor may tackle a top international championship in 2014.