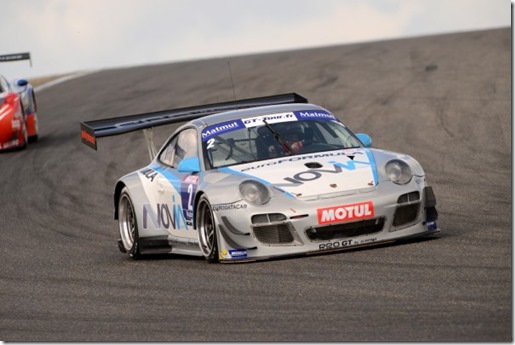 The “Volant Euroformula” 2012, Enzo Guibbert, started this year in the highly competitive French GT championship and for a first in this discipline, it is safe to say that his gamble pretty much paid off! We met him at the Euroformula School:

First of all, success stayed cruelly out of our reach. Then there was not enough driving practice between races which handicapped me the most because I wasn’t at my best at the start of the meeting. I had to work around technical breakdowns like in Imola, for example, where I only raced in the qualifiers! Between lack of experience, hard to overcome without practice, and points lost because of various problems we ran into, we automatically end up with a season of highs and lows. Also, the Porsche, an excellent car all things considered, doesn’t have the top speed our rivals had like in Castellet, for example, where we were giving away 10 kilometres/hour to the leaders, that’s about seven tenths of a second lost. Even though the car was well balanced in the bends, it was impossible to catch up on the time lost.

This season had a lot of powerful moments but the best memory will always be my pole position in Ledenon, all my family were there and we weren’t far from home with all our friends, it will always be a special moment because it was the completion of a year’s work with a lot of sacrifices, there was a lot of emotion! My season also had some bad times, the most notable being the meeting in Imola where I could not take part in the two races because of mechanical problems. The outcome still remains positive in relation to my progress throughout the season. I had a good season as part of Philippe Alméras’ Pro GT organisation, they have a good team. For next year I hope to start a new season in GT or to run in the Porsche Cup France for which I have already been selected to try for the Scholarship.

My victory in the “Volant Euroformula” allowed me to drive this year, without it I think I would have had to give up my career. This Volant was a great opportunity for me. I remember the final as if it was yesterday. I was motivated and came to win. I had focus from the start and decided to attack from my very first lap. With good pace, I felt at ease in the car and everything went well. A great moment. Thanks again!

Enzo Guibbert will now relinquish his place to the winner of the “Volant Euroformula” 2013, Anthoine Hubert, but we will continue to follow his progress!