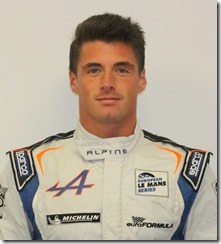 After many international successes in Endurance and, not least, the unforgettable general ranking victory of the 1978 24 Hours of Le Mans; Alpine and their drivers, Nelson Panciatici and Pierre Ragues, snatched victory in the 2013 European Le Mans Series (ELMS).

Now Nelson Panciatici puts his title back into play as official Alpine driver. Just as he lit up the championship and was instrumental in the Alpine A450’s claw back at Le Mans 24 Hours last year, so he is back on the Signatech-Alpine Team, managed by Philippe Sinault, in the European Le Mans Series and Le Mans 24 Hours. His cohorts this year will be Frenchman Paul Loup Chatin and Englishman Oliver Webb.

From the start, Nelson Panciatici has played his part in Alpine’s comeback at the highest level and he would not, not for anything in the world, miss the opportunity to get behind the wheel of the Alpine A450 equipped with Michelin tyres: "Ever since I helped lift the ELMS trophy I’ve had just one ambition: to go back and score new victories. We have to defend our title and shine at Le Mans. I am lucky to be in a team of passionate and competent people that I’m getting to know better all the time, which is important, especially in endurance. I also have a great time with them! I had other offers, which I looked into very seriously, but I wanted to stay with Alpine because racing for such a legendary constructor is incredibly lucky for a young racing driver. I think that my co-drivers and I have the means to aim for victory, right from the start of the season. When a title is back in play, everyone’s expectations are naturally high but I feel I can take on that responsibility because I know the whole team is behind us to help and give us a good car. I hope we have as good a season as we had last year!"

Some great racing drivers such as Patrick Depailler, Jean Pierre Jabouille, Henri Pescarolo, Didier Pironi, Jean Claude Andruet, Jean Luc Thérier as well as Jean Pierre Jaussaud and many others have taken titles simultaneously in rallying, single-seater and prototypes with Alpine. The Signatech-Alpine team picked up the baton in 2013… Rest assured that Nelson Panciatici and the whole team are ready to take on the challenge and continue to write the Alpine story!