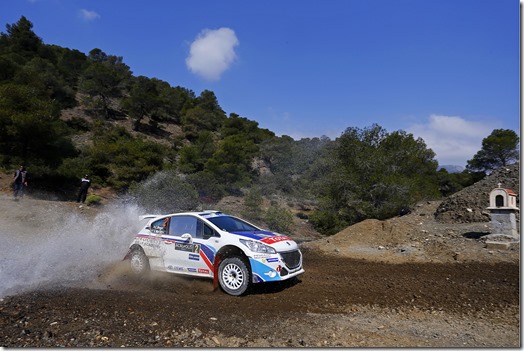 *Pushkar and Sukhovenko triumph at the last in ERC support categories

Craig Breen has become the third different winner in as many rounds of this year’s FIA European Rally Championship with an emotional maiden victory in the all-action series.

The Irishman’s success on the legendary Acropolis Rally marked a debut ERC win for Peugeot’s all-new 208T16 and follows Kajetan Kajetanowicz’s triumph in Poland last year when he scored the first victory by an R5 car in the flagship regional championship.

Behind Breen and British co-driver Scott Martin, who move to the top of the ERC standings following their first-place finish in Greece, Bryan Bouffier and Xavier Panseri (Citroën DS3 RRC) finished second with Kajetanowicz and Jarek Baran completing the podium in their M-Sport Ford Fiesta.

Breen, whose performance earned him the prestigious Colin McRae ERC Flat Out Trophy, celebrated his victory by paying tribute to Gareth Roberts, his best friend and former co-driver who lost his life in a rally crash in 2012. He also remembered his idol, the late Frank Meagher, who was the last Irishman to win a round of the European championship.

“It’s been the perfect weekend,” said Breen. “We showed a lot of speed on the Tarmac yesterday and everything worked just as well on gravel today so hats off to the team and Peugeot Sport for all their hard work. Frank Meagher was my absolute idol. But I remember Gareth and me asking ourselves the day before the accident how long it would take until we could be winning one of these events. A couple of years later and it’s an amazing feeling and thanks to Scott, he’s done a fantastic job.”

Breen started Sunday’s gravel-based final leg leading by 14.7s and remained in control up front as Bouffier and Kajetanowicz fought out a dramatic battle for second place, which Bouffier eventually won after Kajetanowicz elected to settle for third. All three drivers were using Michelin tyres.

“My target, as usually, is to win and I did quite a lot of mistakes this weekend so I’m a little disappointed,” said Bouffier. “But we only discovered the car on Tarmac in shakedown and on gravel this morning so we have to be happy with this result. Now we will try to beat Craig on the next round in Ireland.” For Kajetanowicz, the result maintained his strong start to the season for the LOTOS Rally Team. “It was an incredible rally for us and we are very happy to be on the podium,” he said.

While Lappi was unable to emulate the spectacular performance that carried him to victory on the last ERC round he remains in the thick of the title fight, four points behind Breen.

Emerging Russian star Vasily Gryazin had to settle for sixth after he stopped to change a left-rear puncture on Sunday’s second stage. Jaroslav Orsák overcame suspension and steering dramas to take seventh with Jean-Michel Raoux securing his first points of the season in eighth.

Jaromír Tarabus bagged his first stage win of 2014 with the fastest time through the all-asphalt Super Special Korinthos. But his use of Tarmac tyres infringed the rules and he was handed a three-minute time penalty, which left him in ninth place at the finish. Robert Consani soldiered on following myriad technical problems to complete the top 10 and score the final leg bonus point ahead of Italian ERC newcomer Giacomo Costenaro and Czech ERC stalwart Antonín Tlusťák.

Sepp Wiegand restarted on day two after retiring his ŠKODA AUTO Deutschland Fabia with broken suspension on Saturday afternoon. After posting several strong stage times the young German bagged three leg bonus points. However, there was no restart for Kevin Abbring after the Dutchman retired from the lead on stage five with a high water temperature on his 208T16.

ERC Production Car Cup: Dramatic win for Pushkar as Érdi drops out in

Vitaliy Pushkar scored his maiden ERC Production Car Cup victory in dramatic fashion. Tibor Érdi Jr, who had led from the start, was prepared to concede defeat after losing a chunk of time on the final stage with broken rear suspension. But when Pushkar – who had cancelled out Érdi’s comfortable overnight lead with a string of fastest stage times – emerged at the stop line with a front-left puncture, Érdi Jr thought victory would be his after all only to retire on the road section heading to the finish. Martin Hudec almost rolled in the closing stages but came home in second behind Pushkar after clutch and brake problems hampered his progress. Cypriot Charalambos Timotheou completed the podium.

Evgeny Sukhovenko emerged as a star of the future with a debut ERC 2WD Championship victory. The 23-year-old Russian started the final stage 4.2s behind Simone Tempestini. But when the Romanian teenager damaged his Citroën DS3 R3T’s radiator going through a water crossing on the last run, Sukhovenko was able to pick up the pieces and win in his Renault Clio R3. Defending champion Zoltán Bessenyey had led at the overnight halt following Todor Slavov’s crash on stage five. But the Hungarian’s Honda Civic Type R didn’t quite pack enough punch to fend off Tempestini and Sukhovenko. Nevertheless, the TV presenter fought back to finish second with Alex Filip a fine third on the first of five starts in this year’s ERC. Greek veteran Haris Kaltsounis completed the finishers on his 41st Acropolis Rally.

Go to www.fiaerc.com for the championship positions following round three of 12.