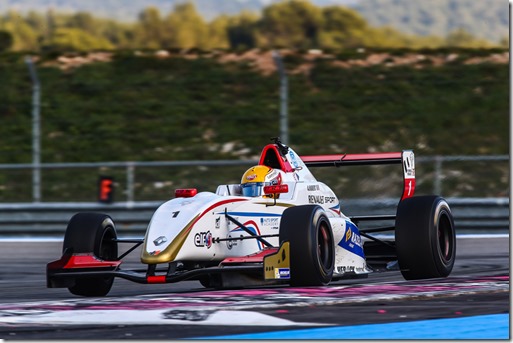 Anthoine Hubert, the "Volant Euroformula" 2013, took part this weekend in his first Eurocup race which attracts the best drivers of this category. In a highly competitive environment, where each place is won by sheer hard work, Anthoine scored his first points in the second race finishing in a good seventh place after qualifying in 10th position on the starting grid.

In the first race, any kind of win for Anthoine Hubert was scotched when two drivers collided right in front of him, forcing him to reverse. He was back in the race in 26th place and scrambled up to 18th for the finish when he had previously been set for a place in the top 10.

Anthoine: "My only regret is that I didn’t score any points in the first race but that’s just the way it is. I finish as best rookie in the second race and in the qualifiers I’m behind drivers who have one or two years experience, so it’s all very positive. The next race is a month away and my aim now is to focus on preparing for that meeting."

Anthoine Hubert is not the only one to shine in Alcaniz. Simon Gachet, the "Euroformula Volant" 2011 scored points in both races when he finished ninth and sixth respectively and is now in a seventh place tie in the overall rankings.

Also on the roll of honour at the start of this season is Paul Loup Chatin, the "Volant Euroformula" 2010, who finished fifth at Silverstone in the European Le Mans Series behind the wheel of the Alpine A450. Not least, a first victory for Jordan Perroy, finalist in the "Volant Euroformula" 2011, in the Bugatti V de V single-seater category. He is now in second place in the overall rankings after two trials.

Laurent Fradon is very satisfied: "We have a talented driver in Anthoine Hubert and we know he will give us some excellent results. He had a good meeting where he showed us nice things. But what gives me real pleasure is the overall performance by our alumni or "Volants" in the various national or international championships. It shows the quality of our training. We expect a lot from Anthoine in the coming races but also from our other students!"

The next meeting in Eurocup is set for May 31 and June 1 on the Spa Francorchamps circuit in Belgium. Our "Volants Euroformula" will set their hearts on proving they can give us the same performance as this weekend and step up on the podium, they certainly have the potential to!