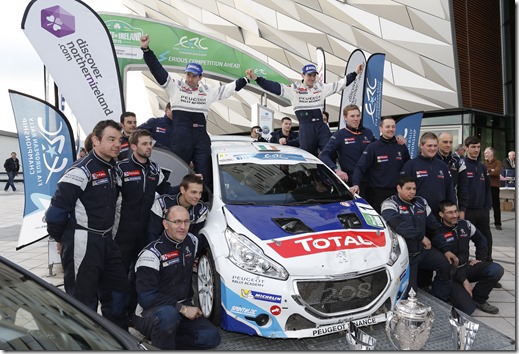 Craig Breen has achieved a childhood ambition by winning the Discover Northern Ireland Circuit of Ireland Rally – and in doing so, the Peugeot Rally Academy driver has taken the lead of the 2015 FIA European Rally Championship.

Co-driven by Scott Martin, the 25-year old Irishman drove brilliantly to keep himself in contention, as his 208 T16 suffered a mysterious and intermittent problem with the turbo pressure pop-off system for three quarters of the event. Fearing the car would lose power at any moment, Breen had to drive flat-out when things were going well, to compensate the time he’d lose when the boost was lost. Despite this, Breen swapped the lead with Robert Barrable – but the Ford Fiesta R5 driver crashed out of the lead three stages from the end.

“I’ve waited all my life for this moment – winning the Circuit of Ireland means more than anything else in the world to me,” said Breen who also tops the ERC Asphalt Master standings. “To put my name on the same trophy as my hero Frank Meagher is something really special. We had an overshoot and stalled twice on the last stage. I thought I’d blown it, but Scott kept my head together. I have nothing left in my body.”

Having not rallied since last October, Barrable set the fastest time on the Qualifying Stage and took that form into the rally itself. The lead swapped four times in five stages, as little as 0.5s separated Barrable and Breen at one stage. Barrable led by 1.1s going into SS16, but skidded over a bank on a slippery left hand corner and out of the event.

Kajetan Kajetanowicz impressed on his first visit to Northern Ireland. Describing the Tarmac stages as some of the best he’d ever driven on, the Pole had a number of close moments as he pushed his LOTOS Rally Team Fiesta R5 to the limit. He chased Breen hard for victory, finishing just 6.4s behind in second place after Breen lost time with a spin on the penultimate stage. Kajetanowicz earned 7000 Euros in prize money for his efforts.

The Moffett brothers, Josh and Sam, enjoyed a close battle throughout in their identical Ford Fiesta RRCs. It was sibling rivalry in the extreme, as they pushed hard over the Northern Ireland stages – which compared to the wet and muddy first day, were dry but just as slippery on day two. Just 41.8s separated them at the finish, with Josh claiming the final podium position.

Charles Martin came to Northern Ireland to gain experience, and on his first ERC outing in his Peugeot Rally Academy 208 T16, he achieved everything and more by finishing fifth.

Alexey Lukyanuk didn’t expect to finish in the points after his Fiesta R5 broke a driveshaft under braking on SS2. But after an excellent run on his first ERC Tarmac rally, which saw his pace increase to under one second per kilometre slower than the pacesetters, he moves up to third in the ERC drivers’ standings after finishing sixth.

Tommy Doyle finished seventh in his ŠKODA, followed by the similar Fabia S2000 of Jaromír Tarabus, who survived a trip into a ditch. Behind the ERC Junior-winning Emil Bergkvist (see below) Raul Jeets has a local farmer to thank for finishing 10th, after he opened a gate to let him out of a field he’d put his MM-Motorsport Fiesta R5 into on SS12.

Euan Thorburn was seventh in his Fiesta S2000, when broken power steering put him out after SS15, while Jonny Greer retired his Citroën DS3 R5 at the end of the final stage after a fire in the engine bay. He has been sixth at the time.

On his first Circuit of Ireland, Krisztián Hideg dominated the NR4 category, winning ERC2 by 23.9s in his Mitsubishi Lancer Evolution IX. The Hungarian driver finished the event with no brakes, but managed to get the car back to Belfast for the finish in 13th overall. Vojtěch Štajf suffered brake problems on the longest stage in his Subaru Duck Czech National Team Impreza WRX STI, but second in Northern Ireland gives him the lead in the drivers’ points table. Dávid Botka enjoyed a trouble-free run in his Lancer Evolution IX, finishing a strong third, while Tibor Érdi had to nurse his Evo X through part of the final day with broken suspension and looked set to finish fourth, before a late retirement. Glamour model Inessa Tushkanova walked away from a heavy crash, after skidding off the road in her Lancer Evolution X.

The ADAC Opel Rallye Junior Team scored a fantastic 1-2 in ERC Junior, with Emil Bergkvist scoring his second victory of the season in his Adam R2. He was put under pressure on day two by a charging team-mate, Marijan Griebel, who closed the gap to just 0.2s by the finish. Such was the pace of the Opel drivers, that they finished ninth and 10th overall. Chris Ingram finished third in his Peugeot UK 208 and was rightly delighted to finish on the podium, having crashed out of all three of his previous rallies in Northern Ireland. Sports Racing Technologies team-mates Vasily Gryazin and Ralfs Sirmacis finished fourth and fifth in their 208s. Gryazin had to deal with steering problems on SS10 and a broken engine mount on SS12, which made gear selection awkward, while Sirmacis visited a field on SS11. Łukasz Pieniążek recovered from two early big moments to finish seventh on his Circuit debut, while Florin Tincescu was eighth in a similar 208, despite finishing SS12 with flames coming off the front brakes. Calvin Beattie took ninth. Norway’s Steve Røkland (208) was fourth when he crashed his 208 one kilometre from the end of the final stage. Julius Tannert had a difficult event, breaking a driveshaft in his Adam on day one and hitting a telegraph pole and breaking the radiator on day two. Mattias Adielsson and Kevin Eves both crashed their 208s on day two, while Fergus Greensmith’s Fiesta also ended up in a ditch. The unluckiest driver on the Circuit of Ireland was Jon Armstrong. He held a big 33.4s lead overnight in his 208, but was given a five minute penalty for missing a tyre marking. The Northern Ireland driver elected not to start day two but earned the prestigious Colin McRae ERC Flat Out Trophy for his efforts. Ekaterina Stratieva won the ERC Ladies’ Trophy.

Idris Elba completed the event in a Fiesta R1 – the Hollywood star on the Circuit of Ireland filming a documentary for Discovery TV, entitled Idris Elba: Speed Demon.

Go to Fiaerc.com for the championship positions following round three of 10.

Round 04/10: SATA Rallye Açores (Portugal), 4-6 June 2015: Based on the archipelago’s largest island of São Miguel in the mid-Atlantic, the event will celebrate its half-century in 2015. The timed tests criss-cross breath-taking scenery and lush countryside, and are characterised by their sandy surface and narrow and undulating nature. And because the stages are often no wider than the width of a car, there is simply no margin for error, particularly on the Sete Cedades test, which runs along the rim of a volcanic crater lake. Changeable weather is also a factor with conditions switching from sunshine to showers and patches of fog thrown in for good measure.